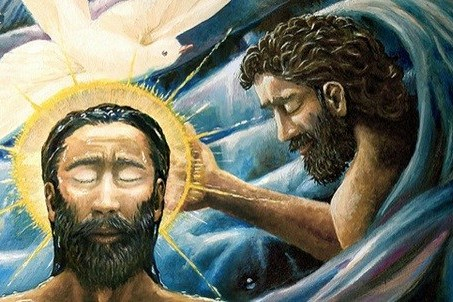 Is This the One?

I want to invite us to picture this scene laid out for us in the Gospel of Luke. Hundreds, if not thousands of people, gathered together around a river bank, where a lone figure calls out to them to repent, to turn away from the wrong things they’ve been doing, and turn back to God.

The man calling out to the crowds to repent is dressed in camel’s hide, his hair is disheveled, he has a wild look in his eyes. But he speaks with the authority of the prophets of old.

The people have been longing for a word from God for so many years. They’ve wondered if God has forgotten about them, they wonder if God even cares. And now this man, crazy as he may seem, delivers a word with power and authority from God.

Long gone at this point are any memories of the angels who proclaimed the newborn king, the shepherds and the wise men who came to give baby Jesus honor and Glory.

For some, the birth of the little child of whom angels proclaimed glad tidings may have seemed like a blip on the screen. Perhaps the announcement had been a mistake? The baby Jesus lived a childhood of relative obscurity. As Jesus grew into adolescence he seemed to do little that was noteworthy or spectacular.

But here, here standing in the midst of the Jordan River was someone who stood apart from the crowd. This man, who invited them to receive God’s forgiveness. This man who spoke with such authority. John the Baptizer. Perhaps he was the one?

Someone Even Greater Was In Their Midst

If John did not even consider himself worthy of doing such a lowly task that was normally done by the lowliest of servants, then the Messiah, the Anointed One, is indeed much more powerful than he.

Little do the people know that the Promised One is actually among them, that he had been there all along. The Messiah had lived among them, he had grown up with them. He had gone to school and the synagogue with them. He had interacted with them in the marketplace. He knew very well the situation that they were in. He knew what they were going through. He had been there all along.

And now John the Baptist had come to prepare their hearts for Jesus the Messiah, so that they would be able to see and recognize Jesus for who he was — when the time was right.

The Baptism of Jesus

And then, just like that, there he was. Standing in line with everyone else, waiting to be baptized in the waters of the river Jordan. Humble and unassuming, gentle and meek, he plunged into the muddy waters of the Jordan river.

In entering into the Jordan river, Jesus walked in the footsteps of the Israelites who crossed the Jordan river to get to the promised land after wandering in the wilderness for 40 years.

In plunging beneath the waters of the Jordan River, Jesus followed the patter of Naaman, the Aramean commander who bathed in the Jordan river to be cleansed of his leprosy.

And of course in submitting to John’s baptism, Jesus identified with the crowds of Jewish people who accepted John’s invitation to prepare their hearts for the coming of God’s Kingdom.

But when Jesus came up out of the water, something different, something unique happened. Something that hadn’t happened when everyone else was baptized.

When Jesus was baptized and was praying, “the heaven was opened, and the Holy Spirit descended on him in bodily form like a dove. And a voice came from heaven, ‘You are my Son, the Beloved; with you I am well pleased’” (Luke 3:22).

Was this for the benefit of Jesus, or John the Baptist, or the people present? Did anyone else even see this happen?

We don’t actually know, but it’s interesting to note here that each member of the Trinity played an active role in Jesus’s baptism, acting in complete unity in this one scene. God the Father’s voice calls out from heaven, affirming Jesus as the Beloved Son. Jesus identifying with the people. The Holy Spirit descending on Jesus like a dove. The Trinity, the 3-in-1, God the Father, God the Son, and God the Holy Spirit, acting in complete unity.

And So It Begins

And this is in many ways a foreshadowing of what is to come. Jesus’s baptism marks the start of his public ministry. Up until this point Jesus had lived among the people in relative obscurity. But now the time was right for everyone to know who Jesus was and what He had come to do. The time was ripe for the promises to be fulfilled.

After his baptism, Jesus began his public ministry of doing miracles, and healing people, of showing forth God’s love, of proclaiming God’s grace, mercy, and forgiveness, of reconciling us to God and filling us with the Holy Spirit.

But it’s also interesting to note that these words that were spoken over Jesus, this affirmation by God the Father that Jesus is the Beloved Son, with whom the Father is well pleased, takes place even before Jesus had done any miracles, before he had done anything spectacular.

In her book, Liturgy of the Ordinary, Anglican Pastor Tish Harrison Warren says,

It’s remarkable that when the Father declares at Jesus’ baptism, “This is my beloved Son, with whom I am well pleased,” Jesus hasn’t yet done much of anything that many would find impressive. He hasn’t yet healed anyone or resisted Satan in the wilderness. He hasn’t yet been crucified or resurrected. It would make more sense if the Father’s proud announcement came after something grand and glorious — the triumphant moment after feeding a multitude or the big reveal after Lazarus is raised…

Jesus didn’t have to do those things in order to gain God’s love or approval. Jesus did those things out of a strong sense of his identity as God’s Beloved Son.

Tish Harrison Warren goes on to say that,

Jesus is eternally beloved by the Father. His every activity unfurls from his identity as the Beloved. He loved others, healed others, preached, taught, rebuked, and redeemed not in order to gain the Father’s approval, but out of his rooted certainty in the Father’s love.

And it’s the same for us. There’s nothing we can do to earn God’s love. Although we are not the Messiah or God’s only Begotten Son, we are beloved children of God. And God loves us not because of the amazing things that we’ve done for God, but simply because God is love. Love is in God’s nature, it’s what God does.

We don’t need to do anything spectacular to earn God’s favor, we just need to open ourselves up to receive God’s love, grace, mercy, and forgiveness.

Reflecting on Jesus’s baptism might bring to mind our own baptisms. Some of you might have been old enough to remember when you were baptized, while others perhaps remember when you confirmed or affirmed your baptismal vows.

“Through the Sacrament of Baptism we are initiated into Christ’s holy Church. We are incorporated into God’s mighty acts of salvation and given new birth through water and the Spirit” (Baptismal Covenant IV).

This morning I want to invite us to “remember our baptism and be thankful.”

As we remember our baptism, let us remember that we too are loved by God, not because of anything wonderful or special that we’ve done, but simply began God has chosen to love us and call us.